If I were to ask you how many of the Top 50 highest mountains in the world are located in Asia, what would it be?

You could be forgiven for considering the vast landmass of the 7 continents on earth and taking a conservative estimate of 50% (25) within Asia, but you would be wrong. Try higher. In actual fact, Asia monopolises the global geographic market, registering every one of the Top 50 highest mountain peaks.

In hindsight, however, this answer may be intuitive through what constitutes a mountain of its own regard. The slight alteration to the question by substituting ‘mountains’ with ‘mountain ranges’ would turn the answer on its head, with the Andes in South America, the Rockies in North America and the Great Dividing Range in Australia making the cut in the Top 12. So it makes sense looking over the Himalayan landscape that the compilation of these peaks would make up the majority of the breathtakingly tall mountains. You get a peak, you get a peak and you get a peak.

However, mountain classification isn’t quite that simple. A system was originally devised to avoid the semantics of labeling between countryside hills and mountains, but has been subsequently applied to mountainous regions in the order of the Himalayas to provide a quantitative assessment for the serrated landscape. The term Topographic Prominence has devised a relative height threshold for a peak in relation to the surrounding peaks, for which they can be considered their own free-standing mountain. The prominence threshold of 2000ft (~600m), established by Thompson (1964), is calculated through the height of the peak’s summit above the lowest contour line encircling itself and no higher summit.

This classification system lays further claim to the exalted nature of Asia’s mountain ranges, in particular the Himalayas, which contributes the most peaks within the Top 50. Although the Himalayas and Mount Everest are deeply entrenched in human lore, seen as the pinnacle of personal endurance and triumph when conquered, they are still a young geological feature in the 100 million year scale timeline of the earth.

In fact, they are the most recently formed mountain range, emerging approximately 45-60 million years ago. Estimations for this range have been an onerous archaeological task involving Carbon dating  and genetic linkage analysis of mammal and marine fossils respectively. For the upper bound of the range, the collection of marine sedimentation by Powell & Conaghan (1973) within the region where the Indian and Eurasian tectonic plates now overlap, dated back 55-60 million years, infer the presence of an ocean between landmasses at this time. Correspondingly, mammal fossils originating from Mongolia discovered by Sahni & Kumar (1974), being no older than 45 millions years, indicate that the landmasses had converged by this time.

Tectonic theory suggests that, due to the difference in crust thickness and density between landmasses, subduction of the Indian subcontinental plate occurred.

The immense shearing force upon collision, attributed to the relatively extreme rate of movement of India’s landmass (up to 15-20 cm/yr), causing the shaving off and protrusion of India’s lithospheric crust surface. This now spectacularly comprises the Himalayan mountain range.

Unfortunately, spectacular landscapes are not the only consequences of collision and suturing of tectonic plates. Seismic and volcanic activity are significantly heightened parallel to the fault line produced by lithosphere subduction. The Ring of Fire, lining the outskirts of the Pacific Ocean for 40,000 km, consists of such activity. 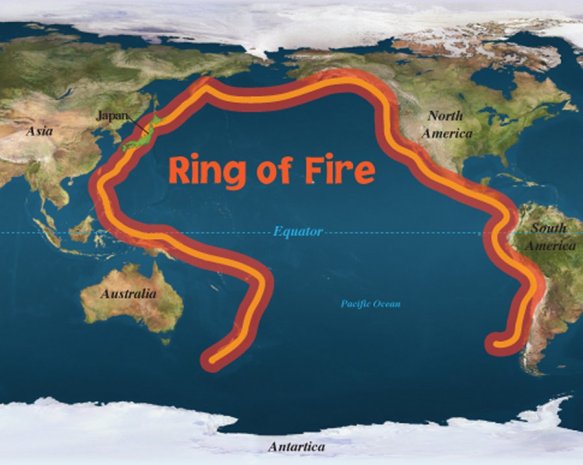 The entire New Zealand landmass perilously lies on the Ring of Fire fault line. Although early warning systems for earthquake magnitude and epicenter detection are under development, warning time for state-of-the-art systems are still only up to 10 seconds before strong shaking occurs. However, countries adjacent to fault lines such as New Zealand are aware of the peril and can implement arresting controls prior to the event (such as constructing damage-minimising buildings that are designed to sway with the movement of the earth without crumbling), as well as mitigating controls in response to the event that lessen the effects of the disaster (such as increased funding towards emergency procedures).

A portrayal of New Zealand’s seismic dread comes in the form of a most unwanted broken record for the country. 2016 felt the most recorded earthquakes for this country, amassing a total of 32,828 seismic events, including a magnitude 7.8 earthquake in November resulting in 2 casualties. This number was significantly above the still amazing average of 20,000 events per year. No wonder seismologists dubbed 2016 a groundbreaking year in New Zealand history.